Thanksgiving activities and crafts around the school

Thanksgiving is an important holiday for many people in the United States. The holiday is celebrated on the fourth Thursday of November and is seen as a day to give thanks for the things we have in our lives. On Thanksgiving, it's typical that families get together for a big dinner of turkey, mashed potatoes with gravy, cranberry sauce, stuffing, pumpkin pie, and more! If you can't be with your family during Thanksgiving and you spend it with friends instead, we call that "Friendsgiving."

Melissa, Jason and I all love to celebrate Thanksgiving. This year, Thanksgiving falls on Thursday, November 23rd. During the week, us auxiliares wanted to share the history and culture of the holiday with our students and make some crafts with them. Not only did we celebrate Thanksgiving with the Primary kids--we also talked about it with some of the older kids.


In Infantil, we colored cornucopias with the students. Now used as an autumn table decoration, a cornucopia is an icon of the season of fall and of Thanksgiving. Cornucopias feature many different foods, from grapes and pears to pumpkins and corn. The infantil children practiced foods and colors in English while coloring the cornucopia.

The students had a lot of fun creating their own little turkeys!


In Primaria 3 and 4, Melissa created wreathes with the students. 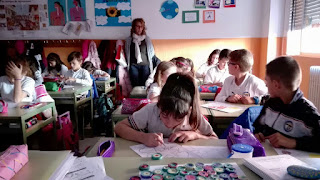 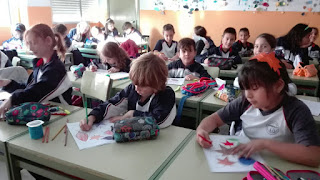 In Primaria 5 and 6, Jason and the students created turkeys by tracing their hands on paper.

Autumn--also commonly called fall in the United States--is one of my favorite seasons! In the U.S., the leaves change from green to beautiful hues of red, orange, yellow, brown, and even purple.

Apart from the leaves changing color, I love fall because it means the apple orchards are open to the public to go and pick apples. My state, Minnesota, has lots of apples. We even invented a popular apple called the “Honey Crisp.” With these apples, we make desserts such as apple crisp and the American classic: apple pie.

We also have lots of pumpkins in autumn! People can go to pumpkin patches and choose their favorite pumpkins to purchase and use to decorate their house. During Halloween, people typically carve a face into the pumpkin, turning it into a “Jack O’Lantern.” We also bake pumpkin pie and pumpkin bars in autumn. Some people even bake the pumpkin seeds and eat them for a delicious and healthy autumn snack!

During this season, us auxiliares wanted to share our love of autumn with the students. Each grade, from Infantil through Primaria 6, participated in the project. Our infantil classes colored and wrote their names on apples. 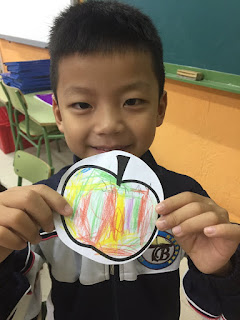 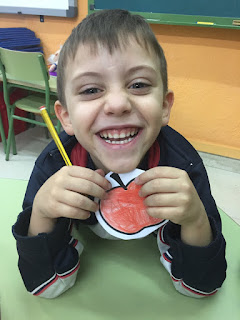 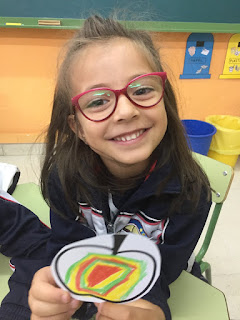 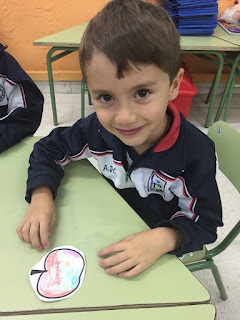 Our Primaria 1 and 2 kids colored, wrote their names on, and cut out some fall leaves. 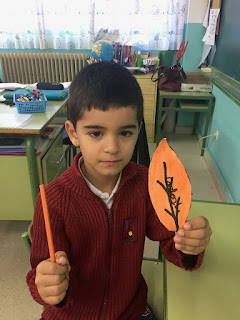 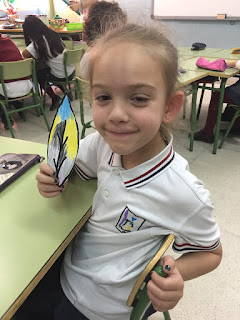 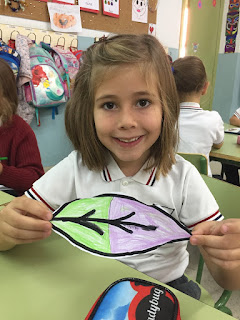 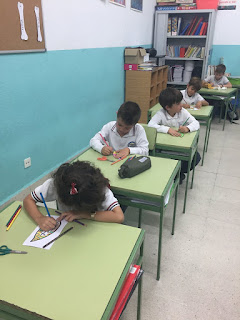 In Primaria 3 and 4, the students traced their hand (to look like a leaf), colored them, and wrote their name on them. 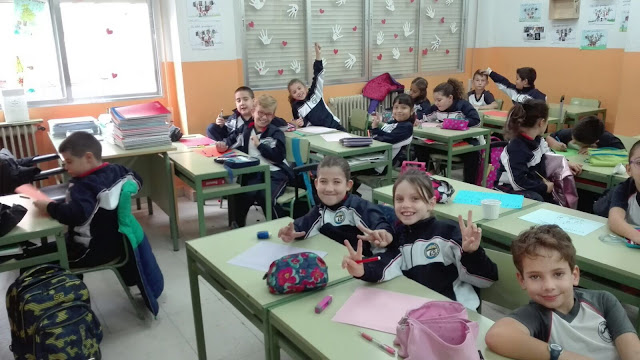 Finally, the Primaria 5 and 6 kids each colored their own paper pumpkin to add to our “pumpkin patch” under our autumn trees. 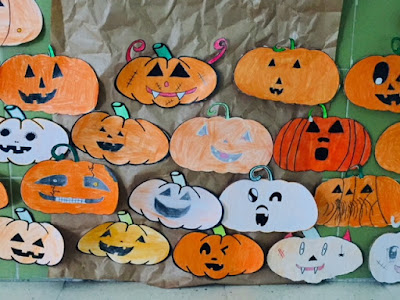 Melissa, Jason, and I created four paper trees and hung up the students’ work last week. Now, the hallways are beautifully decorated with some colorful autumn trees. Feel free to walk up the stairs and check out the students’ work in the connecting hallway! 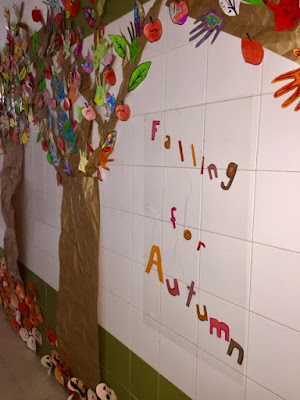 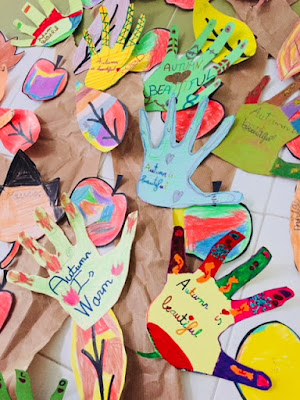 Happy Autumn!
Laura
______________________
Hues: Variations of color
Apple orchard: An apple farm
Apple crisp: An apple dessert in the U.S. made from apples, cinnamon, and a crunchy oat and brown sugar topping.
Pumpkin patch: A pumpkin farm
Carve: To cut shapes into something (like a pumpkin)
Jack O'Lantern: A pumpkin with a face carved into it and a candle inside; typical for Halloween in the U.S.
Pumpkin bars: A type of pumpkin cake baked in a sheet pan, often topped with powdered sugar or cream cheese frosting; a typical autumn dessert in the U.S.

Welcome to the new school year! My name is Laura and I am one of the three new language assistants that will be working at Colegio Torrente Ballester for the 2017-2018 academic year. We are all very excited to be teaching English here, while also spending time learning the Spanish language and experiencing the culture. To start, here's a little bit of information about us assistants:

Melissa ("Meli")
Hi, I'm Melissa from Texas, where we love football and bbq, most people just call me Meli. I am now a second year Auxiliar de Conversacion in Spain, and am excited to be at Torrente Ballester this year. In my free time, I really enjoy reading, travelling and dancing. After living and working in Spain for a year, I am obsessed with tortilla and calamares. I look forward to spending the next year teaching and working with my students at Torrente Ballester.

Jason
Hi, I'm Jason! I grew up in Stamford, Connecticut, a small city in New England just a short train from New York City. The last four years I lived in Boston, Massachusetts while attending Tufts University as a student of international relations. In my free time I like to read, walk my dogs, and hang out with my friends. This is my first time in Spain and I am very excited to explore Madrid, eat lots of tortilla, learn more about Spanish culture, and be spending the year at Torrente Ballester.

Laura
Hi there, I'm Laura! I'm from the state of Minnesota, which is a U.S. state located by Canada. I came to Spain about two months ago because I wanted to continue teaching English and practicing my Spanish. I love Minnesota, but I also love traveling and living abroad! I previously lived and taught English in Mexico and Colombia for two years. (If you hear me speak Spanish, don't be surprised if an "órale" or a "qué chévere" comes out! In the meantime, I'm trying to learn Spain Spanish)! In my free time, I like to bake desserts, run (so I can eat more desserts), read novels, go hiking and camping, and spend time with friends. I'm excited to spend the year at Colegio Torrente Ballester.

If you see us around the school, feel free to say "hi"!